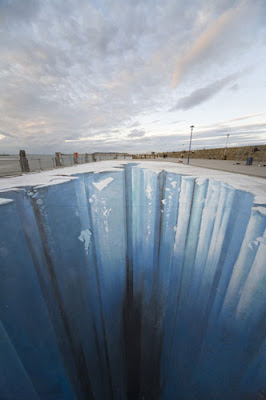 I had never seen work by Edgar Müller before and it is a very interesting take on the street art that you see in cities such as Amsterdam, Barcelona and Venice where people paint images on the streets quite regularly. It must have taken him ages to work out the dimensions on these pieces as well as constant reordering of the focal point. Pretty astonishing stuff. 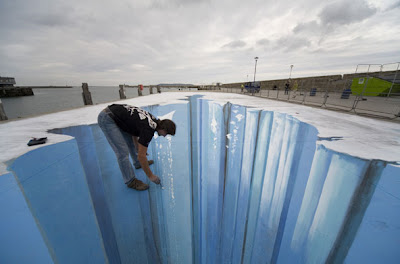 Edgar Müller was born in Mülheim/Ruhr on 10 July 1968 and grew up in the rural city of Straelen in the outermost west of Germany. His great artistic talent to represent its surroundings graphically and picturesquely turns out early, fascinated by painting from youth. He attends the high school in the neighboring town Geldern where the internationally important competition of the street painters takes place for over 30 years now. Inspired by the transitory works of art which meet him on his way to school Edgar Müller take part to this festival at the age of 16 years for the first time. With 19 years he wins this competition with a copy of the picture "Jesus at Emmaus " (Caravaggio).

Within the years following on this he could decide many other international competitions for himself. Since 1998 Edgar Müller owns the title 'maestro madonnari' (master street painter) whom worldwide only few artists bear. This award will allocate on the best known festival of the street painters in the small Pilgrim town Grazie since 1972 in Italy.

Arround the age of 25 Müller decides to devote himself to street painting completely. He travels all over Europe and denies his cost of living with his transitory art. He gives workshops at schools and is co-organizer and member of committee of different Street-Painting-Festivals. Mueller sets up the first and so far only board for street painters in Germany - an internet forum designed for solidarity of the german street painter community.

Edgar Muellers open studio is the street. He presents the people the excellent works of old masters in their weekday, and draws his perfect copies to the observers feet. He invites his audience to his fascination about the old masters art, her expressed view of the world - seeing and understanding it in depth.

Despite courses among well-known artists and studies to the communication designer Edgar is actually an autodidact. He looks for new representation forms for himself again and again. Inspired by the three-dimensional illusion paintings (particularly by works of Kurt Wenner and Julian Beever) he follows this new art form and creates his own style. Based on his knowledge about traditional painting and modern communication Müller uses a more simple and graphic language for his art. He paints over large areas of urban public life and gives them a new appearance thereby, challenging the perception of the passers-by. The observer becomes a part of the new scenery offered. While proceeding their daylife the people are changing the painting's statement on and on. Numerous publications in press and television draw one's attention to its unusual art. 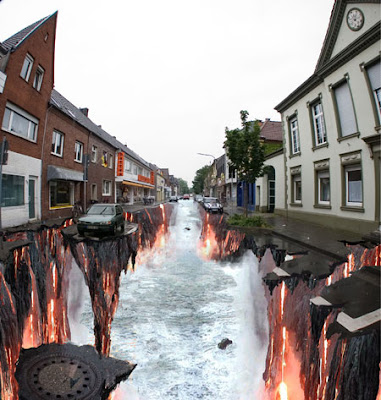