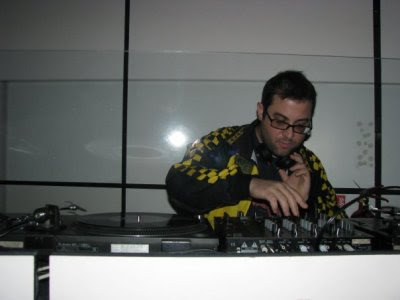 Danny Berman aka Red Rack’em is well known for his naughty pirate soul remixes and disco edits which have been supported by the likes of the Unabombers, Todd Terje, Swag, Yam Who, Prins Thomas as well as institutions such as Fat City and Piccadilly Records. But this is only one small part of Dannys musical voyage. As a DJ he is known for his club rocking, genre busting eclectic sets and this diversity is reflected in his broad output as a producer. He makes cutting edge detroit 2 step as Marlinspike, wonky disco and cosmic boogie as Hot Coins plus beatdown house and glitchy hip hop as Red Rack’em. His work is respected by heroes such as Carl Craig, the Idjut Boys, the Rush Hour crew and Domu. The biggest supporter though, has been Gilles Peterson who has played several tracks on Radio 1 and recently commissioned a Red Rack’em guest mix for his Worldwide International Show. He has also been invited to play at the 2009 Worldwide awards alongside his heroes Jazzanova.

Danny recently returned to the Hot Coins disco project with the Laissez Faire EP on Society Records which was awarded record of the week by Piccadilly and was well supported by Prins Thomas, Chris Duckenfield, Soul Mekanik and Bill Brewster. The lead track Norway Man was licensed to Fred Deakins ‘Nu Balearica’ comp on Ministry Of Sound. This led to him signing an album deal with the mighty Tirk Recordings who have just released the Valiant Truth EP which has also been well received. Danny’s unique take on beatdown has also been well received, with EPs on Untracked and Autodiscoteque pushing a distinctly housey sound. He is currently hard at work on the Loose Change album for Tirk which should be out by summer 2009. (Taken directly from his bio on www.redrackem.com)

Download the mix here.
Posted by Marc Kets at 8:32 AM