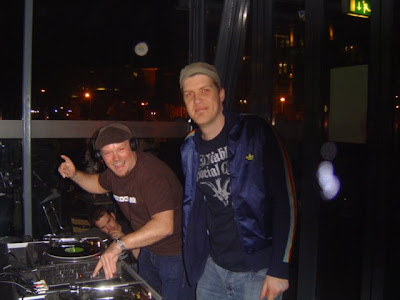 Yeah, this is me but I've been sitting on this one for a while waiting for Paul to get his answers to the questions back to me but seeing as he is understandably busy with his radio show on Salford FM and his ever lovely brood of kids keeping him fighting fit, so I thought I'd take a stab at it. This is also the last time that these questions will be used for the One Hundred Project as I'm going to do different questions for everyone who braves the challenge. So without further ado here I go...

What is on your stereo at the moment?
Moonboots' incredible Primavera mix that takes in everything from Brasilian bits to beardy genius from a while back, which I have been playing in my office of late at the end of the work day as I unwind and it has been pure bliss. Record-wise I have been on a 45 buying frenzy and have unearthed some gems most notably this single by Yedi Ormanin Sesi who I think is Voice of The Seven Woods but packaged to look like a Turkish single from the 70s and is really exciting me at the moment. I can't wait to see if more come out from this project - ears firmly to the tracks on this one. I've also been playing loads of The Undisputed Truth, Norman sure knew how to make psychedelic soul music - check Smiling Faces Sometimes for proof of the sadly departed man's genius.

Goldie - Inner City Life
My initial forays into clubbing were an absolute mess with me going anywhere and everywhere that would let a 16 year-old in, and as you can imagine they were never the most stellar of establishments filled with people who are probably six feet under now but what I'm grateful for is that I got to listen to a real smorgasbord of music at the various nights from thumping techno to jungle to electronica to soul to house and all points inbetween and going to these places is probably why I still have a schizophrenic approach to listening to music - I'm as likely to listen to thumping Surgeon records as I am to blissed-out balearic beauties and I'm truly grateful for this. This is a cut from Goldie's incredible album Timeless released in 1995 and was at the tail-end of the early years and I can remember the first time I heard this, I was in a club listening to a DJ who was pretty shit in all truth and on my way out the door when all of a sudden Diane Charlamagne's voice came over the system and I was well and truly instantly charmed and I had to have the record immediately, so I went charging over to the DJ booth and begged to know what it was as this was still during the dark days of the cover up and thankfully I was told and rushed out to buy it that morning and must have listened to it from start to finish at least a hundred times over the course of that week. This is one of those outstanding records that still makes me stop in my tracks nearly 14 years later. Sublime stuff and for a short time was the future.

Pepe Bradock - Life
As with just about everyone else at the end of the 90s I went through a deep house faze and liked nothing more than playing every record at -8 while getting lost in the groove and while the majority of the records released during that time have aged incredibly badly this gem by Pepe Bradock has well and truly stood the test of time and I even pitch it up a bit now, how times have changed. If I were only allowed to keep one record from my collection this would be it. Magnifique.

The Cure - Lullaby
I blame my older sister for my blatantly unhealthy obsession with The Cure. During what I now see as her goth days - hey it was the early 90's - she would listen to this continuously on her stereo and amongst the absolute drivel that got played this would always get me excited. Now I have never been a goth or even remotely coffin kiddish and I used to get a lot of stick off my friends for playing this but when a record is this good I simply couldn't not play it even if it did clear the occasional dancefloor. Years later when I found out this was an Ibiza classic when the white isle was still a magical place to go I have to admit that I did feel more than a bit vindicated.

What are you looking forward to?
I'm driving down to San Diego tomorrow to go and see Sharon Jones & The Dap Kings at this warehouse club near the Gaslamp District with some good friends and am looking forward to shaking my tail and getting a few drinks down the hatch. I'm also looking forward to kick-starting my record label later this year...watch this space!

What couldn’t you live without? Why?
The obvious answer is music but I'd be nothing without my wife who is truly the most fantastic person I have ever met. She keeps me fairly grounded and my eye on the prize.

Most memorable gig?
I've had a few really good ones in my time but the most memorable one was the night that Paul & I clicked at Northern Disco when we came on in the back room and played a few too many house records at a strictly disco party while severely inebriated all while jumping about like the overexcited fools that we are with a crowd of people well and truly into it. It was that night that I became the left deck and Paul the right deck and unfortunately we're separated by a continent and an ocean but if we weren't we'd be jumping about absolutely everywhere that would have us. There is always something special when I get to play alongside Paul. I'm also the Godfather to his daughter which was something that I am truly honored to be and was incredibly touched when Paul and Gaynor asked me.

What is the best and worst thing about the city that you live in?
I live in a tiny little town on the top of a mountain in Southern California where there truly isn't that much to do but I do work at an Arts High School and I have to truly say that the kids are the best thing about being up here as they inspire me in small ways that always fuel my next thought which is a great thing, that and they do genuinely make me laugh more often than not which I appreciate. The worst thing is that it is in the middle of nowhere and getting anywhere is a mission but you can't have it all, eh?

Given the accelerated pace of modern culture, what are we due a revival in?
Long carefree disco nights...

Is there anything else that you feel that we should know?
Besides the fact that I feel like a bit of a prat for interviewing myself nothing much. Enjoy the mix.

That version of Transfer Station Blue is different to mine - where is it from?